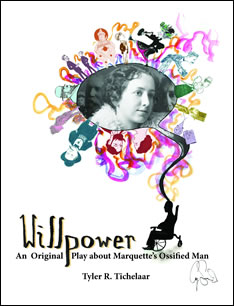 Willpower, a play by Tyler Tichealaar

Book and DVD of Popular Local Play Willpower Now Available
Marquette, MI, June 19, 2015—When Will S. Adams was diagnosed with ossification, a mysterious disease that caused his tissues to harden until he became nearly a living statue, he refused to quit living life fully and was immensely productive. Now the original play Willpower, which translated his life story to the stage, is available as a book and a DVD.
In September 2014, Marquette’s Kaufman Auditorium was packed with people who came out to see the story of Will S. Adams translated to the stage, much as the Marquette Opera House was packed in 1906 with people who came to see his original operetta Miss D.Q. Pons. Born in 1878, Will was the adopted son of Marquette businessman Sidney Adams and his wife Harriet. He grew up in the sandstone mansion at 200 E. Ridge St., played baseball, and sang in the boys choir at St. Paul’s Episcopal Church.
Then a strange disease began to stiffen Will’s legs and work its way up his body until he lost the use of his limbs, became bedridden, and eventually lost his eyesight before his early death at age thirty-one. Through it all, Will never lost his sense of humor, his energy, or his determination to make the most of every minute. In his short life, he ran his own newspaper, wrote poetry, drew cartoons, and composed the operetta Miss D.Q. Pons with Norma Ross, a local music teacher and his close friend, who also starred in the production. Will’s spirit of perseverance would attract countless admirers, including a Detroit Free Press reporter and the famous actress Lillian Russell.
In 2013, the Marquette Regional History Center hired local novelist Tyler Tichelaar to write a play and bring Will Adams’ story to the stage. The MRHC produced Willpower with the aid of a major grant from the Michigan Humanities Council and grants from the Marquette Community Foundation and Upper Peninsula Health Plan. The play was directed by Moire Embley, with Jeff Bruning as musical director. It starred many local actors and included period music. Filled with humor, romance, dreams, and faith, Willpower was received with standing ovations by audiences, and The Mining Journal’s reviewer said, “Will’s is an interesting and inspiring story to all and deserves to be told and retold.”
“Many people have expressed a desire to see the play again,” said Tichelaar, “and while I hope it will someday return to the stage, I wanted to release a book version to tell more of the history behind the play and allow Will’s story to continue to inspire us.” The newly released book includes the entire script of the play, photos from the original production, sheet music of songs from the performance, numerous historical photographs, extensive commentary on the history behind the play, and an essay by director Moire Embley.
The book version of Willpower is now available in local bookstores and gift shops and online through Tichelaar’s website at www.MarquetteFiction.com. A DVD of the original performance is also available at the Marquette Regional History Center’s gift shop.
About the Author
Tyler R. Tichelaar, Ph.D., is a seventh generation Marquette resident devoted to capturing the past through his books. He is the author of the popular history book My Marquette and nine novels, including The Marquette Trilogy and The Children of Arthur series. In writing Willpower, Tichelaar grew to feel a special kinship with Will Adams, who shared his passion for literature, and with Norma Ross, who was friends with his great-grandmother.