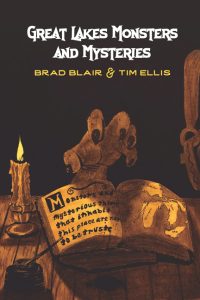 For those of you who missed this week’s spooktacular event, we have a very season and supremely cool presentation of the many weird sightings of monsters and unexplained phenomena in the Great Lakes region, with a focus on the U.P.  A wide range of topics are discussed from paranormal sightings to bigfoot to Great Lakes ghost ships and strange lights in the sky.

What are you waiting for?   The haunting starts here https://youtu.be/m_eqmkSvJhg

UP Notable Book Club:  the Crystal Falls Community District Library in partnership with the U.P. Publishers & Authors Association (UPPAA) has scheduled author events with winners of the UP Notable Book List. The 22nd event is with Brad Blair & Tim Ellis whose Great Lakes Monsters and Mysteries continues their exploration of the bizarre and otherworldly in their latest book. The events are open to all U.P. residents free of charge. Read the complete review at U.P. Book Review.

TIM ELLIS is a veteran paranormal investigator, who has traveled the country looking for the strange and weird, and in 1999 started the Upper Peninsula Paranormal Research Society with Brad Blair and Steve LaPlaunt.  He is the co-host of Creaking Door Paranormal Radio, former host of TAPS Family Radio, co-founder of the Michigan Paranormal Convention, and co-author of the Paranormal hit books, Yoopernatural Haunts and Great Lakes Monsters and Mysteries. He has been featured in documentaries and numerous publications, including USA Today, The Detroit Free Press, and Lake Superior Magazine.

BRAD BLAIR is the co-host of Creaking Door Paranormal Radio, veteran paranormal researcher and author.  In 1999 he founded the Upper Peninsula Paranormal Research Society with Tim Ellis and Steve LaPlaunt.  Brad has investigated claims of paranormal activity across the US and other countries, including England, and Cuba. He has contributed to numerous books and documentaries on the paranormal, has appeared in various publications, and is co-founder of the Michigan Paranormal Convention.

“In their latest book, Ellis and Blair expand their area of interest, stretching their paranormal research across the entire great lakes region, and enveloping more than just ghosts and cryptids.  (A cryptid, for those who don’t know, is a creature for which there is no physical or scientific evidence, but still has people who believe it exists. The most popular of these being the Loch Ness Monster and Bigfoot.)

“They take an approach with this book that makes it stand out from others I’ve read in the same genre, by mixing the historical research they’ve done with seemingly unbelievable tales.  I’ve lived my whole life here and never heard some of the stories, which I really appreciated.  I like being able to learn a little bit about the actual history of the area while I’m trying to scare myself silly.

“Did you know that there was a UFO sighting in the Upper Peninsula in 1953?  It is known in those circles as the Kinross Incident and was widely reported at the time.  Near Kinross Air Force Base in the Eastern U.P. something was seen in the sky and a fighter jet was scrambled to go find it.  The pilot and plane were never seen nor heard from again.  There are numerous sightings of ghost ships and haunted locations discussed in the book, but each one is introduced with historical research in regards to what was claimed to have been seen.”
Read the complete review by Brad Gischia at U.P. Book Review.