The literary treasure of Upper Peninsula (UP), Michigan, is adding a new book of short fiction, North of Nelson: Volume 1, by local author Hilton Everett Moore.

Published by Silver Mountain Press, an independent press based in Covington, Michigan, North of Nelson: Volume 1 is the first collection of short stories by Hilton Everett Moore set in the wilderness of the Upper Peninsula of Michigan. The book includes six stories, all set in mythical village of Nelson, where people live and perish in this often harsh and rugged land. 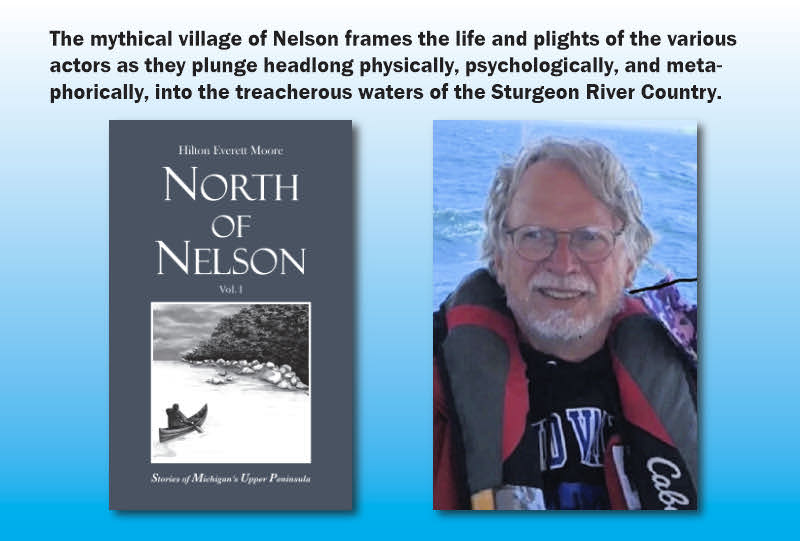 All the stories in the book are works of fiction. But there is a kernel of truth, which the reader can find in many small towns in the Upper Peninsula.

The remote rural character of the short stories presented here in North of Nelson: Volume I, will give the reader a sense of place and time that is rapidly disappearing all across the rural North. All the current populist notions embedded in the Upper Peninsula of Michigan about love, hate, greed, culture and religion are integral in this work.

Despite the regional inspiration of these stories, readers not familiar with the region of UP will be able to thoroughly enjoy these stories. The themes in these stories are universal and extend beyond mere geography.

“You can find the same themes present in any rural area. South, West, anywhere people are deeply connected to the rural lifestyle and value remoteness and the vanishing wilderness,” says Moore. He related that the book started with the story “Silent Mistress,” which he originally penned around 2018.

“It was my first attempt to viscerally explore my own rural childhood in Northern Michigan. My father was a poor preacher in Northern Lower Michigan where I was exposed to both the paucity and grace of the people who surrounded my father’s congregation and the village where we resided.”

Hilton Everett Moore has completed the next book in the series – North of Nelson: Volume II, which he hopes will be published and available to the public by the end of 2022.