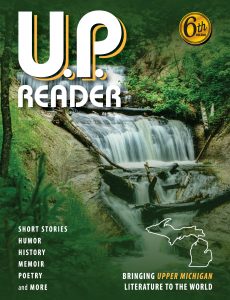 In my haste earlier this week, I neglected to mention the final installment of Michigan In Books blog included a piece on U.P. Reader #6

U.P. Reader: Bringing Upper Michigan Literature to the World Volume 6 Edited by Deborah K. Frontiera and Mikel B. Classen.
It’s always a good day when this annual compendium of poems, short stories, memoirs, history, sparkling essays, and humorous pieces turns up in my mailbox.  The U.P.’s rugged landscape, semi-isolation, long winters, stunning beauty, and the always beckoning adventures makes it a breeding ground for authors. Based on a complete lack of hard facts and the absence of any research I believe there are more authors per capita in the U.P. than any other geographical region in the nation. The peninsula simply calls forth the urge of those living above the bridge to write, record, memorialize, and describe the unique culture and characters spawned by that extraordinary peninsula.
Among my favorite pieces in this anthology is a story of a pair of Yoopers hired by the FBI to put a halt to the smuggling of pasties into the U.P. and another about a group of locals and travelers holed up in the out-of-the-way Dead Wolf Bar during a Christmas Eve snowstorm. Dog lovers will not want to miss Richard Hill’s tribute to his cockerspaniel Maxwell who was his constant companion for 16 years. And I was especially impressed with a poem titled “Novel” by Tamara Lauder the subject of which was our last two years of masks and virtual house arrest. One stanza reads:
“Novel    not the kind your read,
but a virus that you breathe
corona,    without the lime
invisible, divisible, unjust for all.
U.P. Reader Volume #6 a great survey and sampling of the literature generated north of the Straits. By turns, thoughtful, entertaining, or just plain funny there is something here for everyone. And over the last six editions it has earned a reputation as an anthology with high literary standards that offers readers a unique step inside the customs and character of the Upper Peninsula.