UP Notable Book Club presents a virtual Q&A with U.P. author Tyler R. Tichelaar, author of the award-winning Kawbawgam: The Chief, The Legend, The Man

UP Notable Book Club:  the Crystal Falls Community District Library in partnership with the U.P. Publishers & Authors Association (UPPAA) has scheduled author events with winners of the UP Notable Book List. The 10th event is with seventh-generation Marquette resident Tyler R. Tichelaar who will present his award-winning original history book Kawbawgam: The Chief, The Legend, The Man. Tyler’s meticulous research of original sources exposes decades of embellishment and questionable reporting. The events are open to all U.P. residents free of charge. Read my review of Tyler’s book at The U.P. Book Review.

When: Thursday, October 14th, 2021 at 7pm Eastern / 6pm Central
Where:  on the Zoom platform — please contact Evelyn Gathu in advance by email: egathu@uproc.lib.mi.us, or by phone (906) 875-3344.  We recommend you borrow a copy of these books from your local library or purchase from your local bookseller in advance to get the most out of these events. 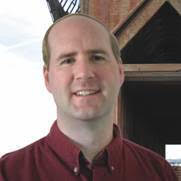 Tyler R. Tichelaar has a PhD in Literature from Western Michigan University and Bachelor’s and Master’s Degrees in English from Northern Michigan University. He is the owner of Marquette Fiction, his own publishing company, and of Superior Book Productions, a professional editing, proofreading, and book layout company. He is also the former president (2008-2019) of the Upper Peninsula Publishers and Authors Association.

Tyler began writing his first novel at age sixteen in 1987. In 2006, he published his first novel, Iron Pioneers: The Marquette Trilogy, Book One. More than twenty books have followed. In 2009, Tyler won first place in the historical fiction category in the Reader Views Literary Awards for his novel Narrow Lives. He has since sponsored that contest, offering the Tyler R. Tichelaar Award for Historical Fiction. In 2011, Tyler was awarded the Marquette County Outstanding Writer Award, and the same year, he received the Barb Kelly Award for Historical Preservation for his efforts to promote Marquette’s history.

While Tyler also writes on such diverse topics as nineteenth-century Gothic fiction and Arthurian historical fantasy, he remains engrossed in writing about Marquette and Upper Michigan as microcosms for the greater American story. He has many more books in the works. Visit Tyler at www.MarquetteFiction.com. 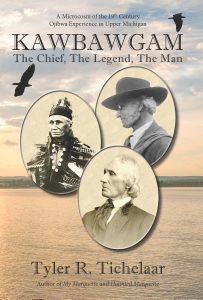 Charles Kawbawgam, “The Last Chief of the Chippewa,” is a legend in Michigan’s Upper Peninsula for allegedly living to age 103 (1799-1902). But few know anything else about him beyond his being buried in Marquette’s beautiful Presque Isle Park. Kawbawgam witnessed a period of intense industrial growth and unheralded change for Native Americans. Growing up at Sault Sainte Marie when the area was still claimed by Great Britain, his first memory was of armed Americans coercing his people into ceding their lands to the United States Government. As the son, nephew, stepson, and later son-in-law of Ojibwa chiefs, and in time a chief in his own right, Kawbawgam learned early that he would have to walk a fine line to keep the peace for his people.

After temporarily migrating to Canada with other Ojibwa in disagreement with the American government, he returned to the Sault where he was recruited to help found the town of Marquette Kawbawgam would preside over an Ojibwa and metis community that ensured the white community’s survival during Marquette’s early years, only to be pushed to the community’s margins as the city grew and prospered. Yet the admiration and affection he won from whites as well as the Ojibwa ensured peace and a legacy that lives on today. Kawbawgam is a story of cross-cultural friendships, survival amid upheaval, and the importance of community and heritage.