More about Will Adams, from Tyler R. Tichelaar’s book My Marquette:

Will Adams, the adopted son of Sidney and Harriet Adams, was born in 1878 to Detroit parents who died while he was an infant. In his youth, Will was a soloist in the boys choir at school and church and enjoyed athletic pursuits, but a baseball injury resulted in soft tissue becoming hard until eventually he ossified into a living statue. By his mid-teens he was confined to a portable couch and only his face remained mobile. By sheer willpower, Will survived to the age of thirty-one. No longer able to perform athletics, he became one of Marquette’s first literary figures, starting his own magazine business. His family hired him an attendant to whom he could dictate his magazine. He named his magazine CHIPS. Besides his own text, he included political cartoons and even caricatures of such town leaders as Peter White, Nathan Kaufman, and John M. Longyear. The paper was largely supported by advertising, so a phone was installed in the Adams home, and his attendant would hold the phone to Will’s mouth so he could talk up his bi-monthly magazine to prospective advertisers.
Will also composed an opera with his childhood friend, Norma Ross, then the directress of the Marquette schools’ music program. Will hummed melodies and Ross wrote them down. Their end result was the production of Miss D. Q. Pons an opera which premiered at the Marquette Opera House on July 3, 1905 with Ross in the title role. Will viewed the opera from the wing in his portable bed, and when its success led to the troupe traveling for sellout performances in Ishpeming, Hancock, Calumet, and Sault Ste. Marie, Will traveled with them by train. In 1906, Will also founded another newspaper, the Marquette Chronicle to which he contributed an original article each day. He died on August 10, 1909, preceded by his adopted father, Sidney Adams in 1906. Will once joked about his literary efforts, “Every specimen of writ is a silent story of how the author was saved from cerrebrius combustion.” 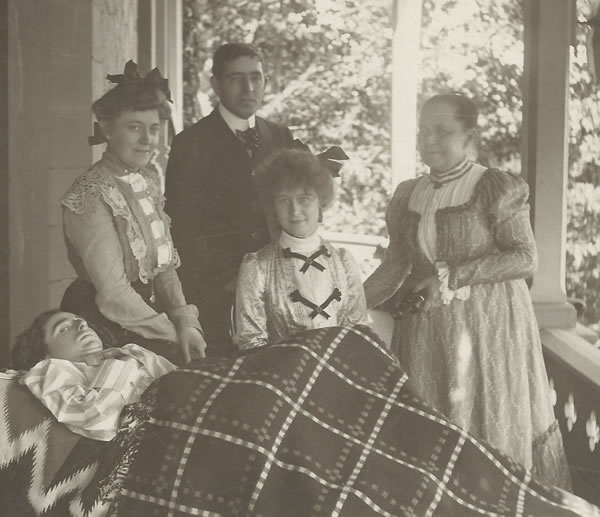 Will Adams with his parents Sidney and Harriet Adams, sister Bertha, and
friend Norma Ross (seated) on the Adams Family Porch.
(Photo Courtesy of the J.M. Longyear Research Library)