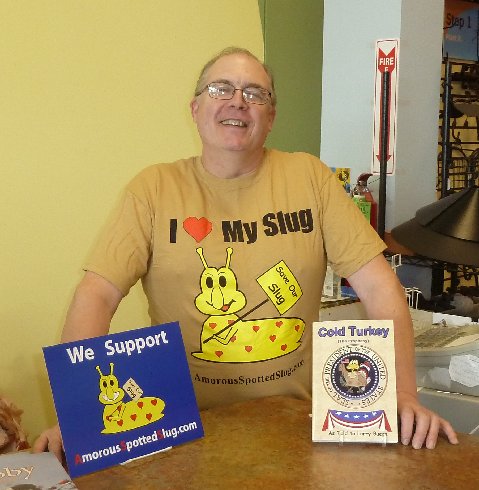 On Monday, March 4th a mild mannered, fiction writer will slip into a phone booth and emerge as Sammy Slug, protector of the downtrodden, champion of the oppressed, and exalter extraordinaire of the Amorous Spotted Slug. He will gird his loins (as well as the rest of his copious body) with a yellow jumpsuit bespeckled with heart-shaped spots and prowl the streets of Marquette and surrounding hamlets. The goal: gathering signatures to support making the Amorous Spotted Slug Michigan’s official State Slug. In the process it may be necessary to tilt at offending windmills and slay the occasional dragon, which is sure to embarrass Sancho (aka wife).
TV-6 has requested an interview with the Amorous Spotted Superhero at his place of business (in front of the Post Office) at 9 am. This will be followed by a more serious interview with the mild mannered, fiction writer at S.L.I.M.E.’s newest S.N.O.T. Chapter, Wild Birds Unlimited of Marquette. 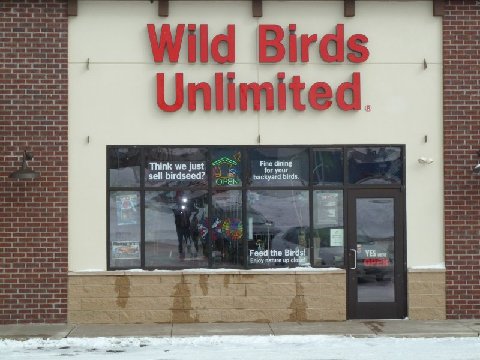 Michael & Deborah Berger of Wild Birds Unlimited of Marquette are the administrators of S.L.I.M.E.’s newest S.N.O.T. Chapter. Wild Birds Unlimited of Marquette is currently the only fixed location for signing an Amorous Spotted Slug for State Slug petition. Wild Birds is one of three Marquette outlets for the Cold Turkey Manuscript. Feel free to stop in and give Mike a hard time; but beware, he will try to convince you that Amorous Spotted Slugs prefer eating bird seed instead of pasties and Mackinaw Island Fudge!