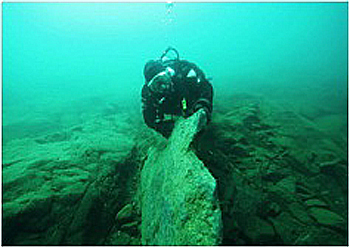 The film is called “AMERICA’S ANCIENT INDUSTRY”
Produced by Bob Kreipke, of Ford Motor Company Historian and with Janine McFadden. It is about UP Copper trade thousands of years ago. They traveled around the UP for their documentation. They came to my house with a camera crew to learn from the family of Fred Rydholm, author of ”Michigan Copper, The Untold Story”.
Many PBS stations will be showing this film. In Marquette Area:
January 3, 2013 8:00 PM Channel 13.1 and 13.2
January 4, 2013 noon same
January 6, 2013 4:00 Sunday same
Detroit extended area, on channel 56, 8:00 January 2, 2013.
Check with your local PBS stations. Tell them you want to see this as a program.
This is an important chapter of our Upper Michigan History and it is not often mentioned in our history books. I congratulate the efforts of this team of researchers for putting this very good film together for us to enjoy. We want to encourage this making of the film and the presentation on PBS. The stations would like to hear from you after you have seen this film.
“AMERICA’S ANCIENT INDUSTRY” was filmed and directed by Robert Kreipke and produced by Janine McFadden with underwater sequences filmed by Luke Clyburn and Kathy Trax. The mission of the Noble Odyssey Foundation is to advance knowledge of the Great Lakes through seagoing education and research projects. The Noble Odyssey professional staff, directed by Luke Clyburn brings together scientists and educators to conduct research projects in and around the Great Lakes. The results of this research are conveyed to the public through documentary films, publications, exhibits and lectures presented throughout the Great Lakes region. In recent years the NOF has produced a series of award-winning films called “Great Lakes, Ancient Shores, about historical and prehistoric discoveries under the lakes.
The nonprofit Noble Odyssey Foundation (a Michigan 501c3) depends on grants and contributions to carry out its unique mission of education and research on the Great Lakes. Through nationwide training of young Navy Sea Cadets as research divers, the foundation also develops appreciation and promotes wise stewardship of Great Lakes resources among America’s future leaders.
Contact:
Captain Luke Clyburn, President
Noble Odyssey Foundation
lclyburn@comcast.net
Or visit www.nobleodyssey.org for more information.