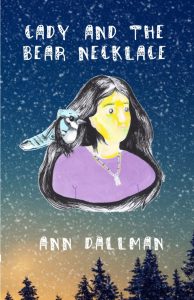 Cady, a 13-year-old girl of Native American heritage, has experienced change in the past year—her father’s marriage to a much younger woman, a new baby brother, and a move from Minnesota to Michigan. She is attending a reservation school for the first time in her life. It’s a difficult juggling act.

One day at school Cady finds an eagle feather on the hallway floor and reports it to the principal. He thanks her for this act of honor and cautions her that a mystery might soon appear in her life. Not long after, while attempting to organize her bedroom closet, Cady discovers an antique Indian beaded necklace hidden under the closet floor. She knows she’s found it for a reason but what is the reason? Is this the mystery her school principal predicted might appear?

She consults with the elders who tell her it is her task to find out why. In the process of solving this mystery Cady’s home life calms down and she draws closer to the teachings and traditions of her culture.

Helping her along the way are new friends: Irish, John Ray, and a talking blue jay who help to guide her as she balances between two worlds. Cady is the underrepresented voice of a young Native girl who is hungry for her traditions.

Ann launched the book with her initial book signing in June at Spies Public Library in Menominee. Three other book signings are scheduled for September and October. She is a retired high school English teacher and currently works as a freelance journalist for Marquette Monthly magazine and other publications.

“I love being a member of UPPAA and have learned so much. Thank you to the officers of this amazing group!”

More info may be found at: www.anndallman.com.