Home Book Reviews Fran Lewis reviews “The Chronicles of the Henry Roach Dairier: The Inception of the Combined Colonies” by Deborah K. Frontiera

Fran Lewis reviews “The Chronicles of the Henry Roach Dairier: The Inception of the Combined Colonies” by Deborah K. Frontiera

The Chronicles of the Henry Roach Dairier: The Inception of the Combined Colonies
by Deborah K. Frontiera 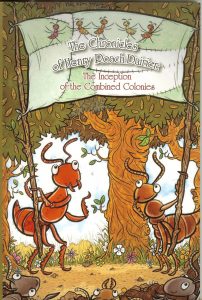 The Inception of the Combined Colonies:

Creating a world that mirrors one of humans is quite inventive and ingenious. Imagine one where the only inhabitants are ants and roaches and as people of different economic or racial backgrounds each side fights for what they want, and each side wants to eliminate the other. The ants are kind, resourceful and intelligent while the roaches are smart but totally self-centered and what happens as you meet both sides, you’ll understand just how far deceptions go, greed, kindness and trust. Plastic and access to it is the primary catalyst for the struggles between these two groups and the reasons why one will eventually dominate the lives of the other. But, first understand that the ants were kind enough to allow, Rashad into their fold, learn the ant language, join in working in the mines and even having access to plastic in order to sustain his life but in reality like in the police or FBI when someone is there to betray for the other side, or like a corporate takeover that you get blindsided and don’t see coming what happens to the ants will mirror that.

Within the story we meet Henry and read his journal and chronicles that helps readers understand what the roaches and their leaders did to the ants and how they took over their plastic mines, gave them 60 percent of the plastic and then things began to deteriorate when the head died and someone else took over the mine and the rules all changed. But Dairia and Dalena were there to protect the ants and the dreams and visions of Essence would hopefully bring them some hope and the new communications system that they created was like their own underground railroad hoping that they could salvage some plastic or their new children would suffer. But the roaches and their leaders were cruel and when anyone dared to resist the result was fatal.

Henry shares through his mother that provides much of the documents for us to read that one ant colony was totally obliterated and the result was they no longer existed.

Then it became necessary for Duncan to leave and provide the information for others in order to finally take control of their lives and many of the ants finally left and would hopefully move to another location but if Rashad new that he was gone and why things would turn dangerous or worse for the aunts. Another one of the aunts learned that the fire ants were with them and the author reminds us that the roaches are all too powerful, someone else is now in charge and the ability to trade with them prospered for a while until they decided to create the same cloth and products themselves. Greed, control, power and how will the ants finally combat the roaches, and will they ever learn to coexist? What about Essence is she with them why isn’t she speaking and what about the visions?

There are two roaches that led the way to the final destruction of one of the ant colonies: Sir Ragnar and Sir Rainart were two that controlled what happened to the ant colonies. When the roaches were in control and their plastic supply in doubt, one allowed them to keep some while the other denied the ants and their young would be born and suffer as a result. As Daeira and Delana realized the gravity of the situation when they no longer had control over their plastic supply, now only allowed to keep 40 percent and Sir. Rainart was to collect the other 60.

Sir Rainart wanted to invest in the ant colonies and the dairying colony was what she wanted. Not considering that they allowed Rashad into their fold, taught him their language and then blindsided them by taking control and leaving them no choice but to mine the plastic and give over most of it to him. Rashad although a traitor claimed that he was there to make sure they knew that the personages would remain the same until things drastically changed.

Duncan decides to leave, and the ants created a tunnel that they would hope would liberate many of them before the Roaches realized that they were doing. Visions of Essence and how she roamed the sky and was the creative life force that endowed the waters with miniscule plants and creatures and then when satisfied with the balance of cycles would go to sleep but eventually she would realize that the pain that was happen would shock and when she observed her world she could not believe the fried for her failed experiment and the illness consumed her. As Henry shares his letters to his mom and hers to him understanding that his search for the sleep chamber and the hidden and lost ant colony she hoped would serve as prove of his good intensions and the library curator worked with him and then the connection needed occurred.

The library curator cautioned Henry to hide the legal documents and the trusted messenger knew he needed to clear out of his main sleeping chamber. Dealing with the messenger and the letter he explained the situation to the Fire 2 and hoped that they would come to the aid of the ants. Things fall into place when the Fire 2 ants, their Captain and their assistants meet with Duncan and a bargain of trade and working together is created but not before the young ant adults with mild plastic deprivation began to emerge and they would be taught the easy tasks to be conducted around the colony but reading and numbers was above their abilities to comprehend.

Chief Hesper oversaw the deliveries that had to be made between the Fire 2 and the dairy ants. The ants brought out the required weight units of plastic and Hesper the Colony Council and the entire colony liked the idea of working together and having trading partners which is an important lesson learned: cooperation, trust and creating the needs of others in order for the ants to thrive and the Fire 2 to learn how to make different things that would sustain their lives. The delivers were made, and the ants were able to figure out how to make cloths and you won’t believe what they realized they could use.

Then Duncan comes in contact with Fauna and Fane in order to know why a dairy ant was traveling alone at night and the answers will come when you learn the reason that Dahlia explains her colony’s urgent need for plastic, their trade relationships with the harvester colony and the fall to roach control.

Then the battle lines will be drawn and the fight for freedom and control will happen and the result will be losing on both sides, but which one will prevail and what will the fate of the combined colonies be? Near the tend of the Second time frame we learn more from Hesper Harvester Colony Council Chief as he recounts for readers that the roaches have done to the ants and allow them the plastic but emptied their central storage chamber of a season’s cycle supply of plastic so they are warned to hide the supplies they are given and they realize that documents have to be translated so the roaches cannot understand them. Colonies are sending maps of their colony in order to create the time frame that the fire ant commander can understand and how the battles will begin and where they will take place. Loses are inevitable and the final count and result you will have to read or endure for yourself as you enter the tunnels and join in the battle along with the ants. Then Henry faces the hearing chamber and Sir Rastus states his case and Henry must speak the right words in order to gain supporters for the excavation and what he is trying to do.

Join the invasion of their freedom as you read the chapter Tenth Time Frame 1 B.C.C. The verdict of the Chief Enforcer and the final decisions you will have to learn for yourself when you enter the hearing chamber, hear the charges and learn the result. Will ants and roaches live together in a combined colony? Will the ants forgive what was done to them? Who will be in charge as one member that is dear to them loses a struggle and others will have to fill the gap?

Some will mate while others might lose the battles and the final reveal and Rashad’s final words will surprise readers as they learn that some endings are new beginnings and others need to create other challenges.

Author Deborah K. Frontiera teaches many lessons in honesty, understanding, cooperation, hope, teamwork, fear, joy, sadness and realizing that ants and roaches are no different than people of different races, colors and creeds that can learn from the ants just how to live as one human colony.