For Immediate Release
Marquette, MI, December 9, 2015—Three centuries after she carried her brother, King Arthur, to Avalon, Morgan le Fay is still interfering in the lives of mortals. At the court of Charlemagne is the handsome and virile Prince Ogier of Denmark, and Morgan le Fay has surprising plans for him. Now Ogier tells the story of his amazing adventures in award-winning author Tyler R. Tichelaar’s new historical fantasy novel Ogier’s Prayer: The Children of Arthur, Book Three. 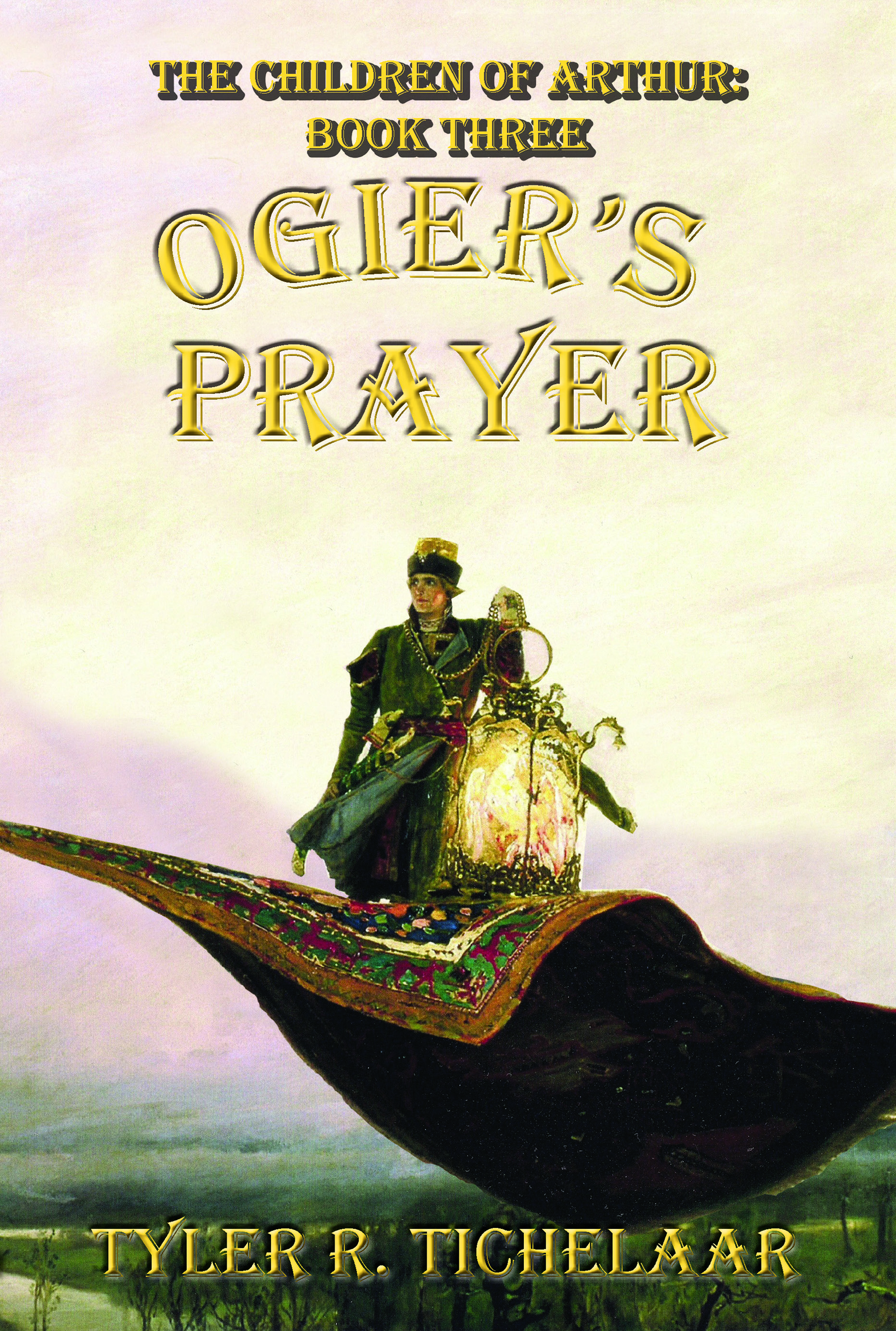 Ogier the Dane is the greatest knight since King Arthur. Blessed at birth by Morgan le Fay and her fellow fairies, he has always known a great destiny awaits him. Even when his evil stepmother Gudrun turns his father’s affections against him, leading to his exile at Charlemagne’s court, he does not cease to aspire to greatness. There he befriends the great knight, Roland, and he achieves many valorous deeds, rescuing princesses and surpassing other men at arms.
Then Ogier’s father dies and his evil stepmother secretly marries Roland’s uncle, Geoffrey, son of the mysterious fairy Melusine. When, soon after, Ogier learns that Gudrun has murdered Geoffrey and taken Melusine’s magic ring, he fears Gudrun has sinister and far-reaching plans. Ogier soon pursues her beyond the limits of the known eighth century world. From France to Avalon, and from the fabled land of the legendary Christian king, Prester John, to the court of Haroun al-Rashid, the caliph of Arabian Nights fame, Ogier finds himself caught up in more adventures and mysteries than he ever could have conceived. Most importantly, before his quest is completed, he will discover that the power of prayer can work wonders that no manner of manly prowess could ever accomplish.
Bookending Ogier’s tale is that of Adam and Anne Delaney, a twentieth century couple who have appeared in each volume of the Children of Arthur series. The Delaneys’ children have just been kidnapped, and they fear it is by the latest incarnation of Ogier’s evil sorceress stepmother, who is preparing to unleash havoc upon the human race. In their efforts to protect their children and stop this ancient supernatural woman, they are guided by the great magician Merlin, who reveals to them their own family’s connections to Morgan le Fay and her lover Ogier.
Arthurian authors and fans have been delighted with each volume of the Children of Arthur series. Sophie Masson, editor of The Road to Camelot, praises the first book, Arthur’s Legacy, as “an intriguing blend of action-packed time-slip fantasy adventure, moving love story, multi-layered mystery, and unusual spiritual exploration.” Cheryl Carpinello, author of Guinevere: On the Eve of Legend, proclaims that the second book, Melusine’s Gift, is “reminiscent of those ancient Tales from the Arabian Nights where one story flows into the next…. I can’t recommend this series enough.” And Roslyn McGrath, author of The Third Mary, calls Ogier’s Prayer an “inspirational re-visioning of the past…vivid, suspenseful storytelling will leave you craving the next installment of this thought-provoking, delightfully plot-twisting series!”
Tyler R. Tichelaar, Ph.D. is the author of numerous historical fiction novels, including The Marquette Trilogy, The Best Place, and the award-winning Narrow Lives, as well as the scholarly books The Gothic Wanderer and King Arthur’s Children and the play Willpower.
Ogier’s Prayer: The Children of Arthur, Book Three (ISBN 9780996240017, Marquette Fiction, 2015) can be purchased in paperback and ebook editions through local and online bookstores. For more information, visit www.ChildrenofArthur.com. Review copies available upon request.