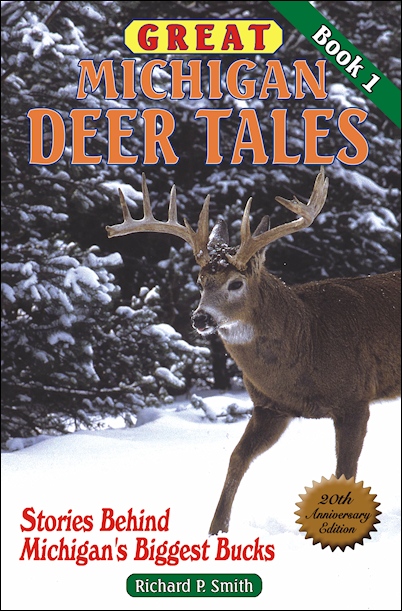 To commemorate the 20th anniversary of publication of a popular series of Michigan deer hunting books, Smith Publications in Marquette has printed a special collector’s edition of the first book in the series. Book 1 of Great Michigan Deer Tales continues to be the best selling title of the series, which now includes six books. Each of the 128-page volumes contains a different collection of true short stories about the biggest bucks bagged by hunters in the state.
The 20th anniversary edition of Book 1 is the fifth printing of the title. Approximately 15,000 copies of the book have been sold, but there are an estimated 750,000 deer hunters in Michigan, so there are still plenty of deer hunters who haven’t read the book.
The first book in the series was originally printed in 1994 to commemorate 100 years of licensed deer hunting in Michigan. The state’s first deer licenses were issued in 1895. Preserving the stories about how, where, when and by whom the state’s biggest bucks were bagged was considered a fitting way to honor the proud tradition of deer hunting in the state by the author.
Veteran outdoor writer Richard P. Smith of Marquette is the author of Great Michigan Deer Tales, and his wife, Lucy La Faive, is the publisher. When the pair published the first book, they had no idea how well it would be received. Since most deer hunters dream about shooting “the big one,” they knew the effort was worth a try.
It didn’t take long for the couple to realize printing the book was a good idea. The 5,000 copies they had printed sold out within the first few months. They printed another 5,000 copies the following year and those were also sold.
The introduction promised that if the book proved to be popular enough, a second book with more big buck stories would be printed, and it was. Since Michigan deer hunters bag a new batch of big bucks every year and create a new collection of great deer tales, it only made sense to add to what had been started. So a new book was added to the series every three or four years.
The stories are based on interviews Smith does with the hunters who bag the biggest bucks in the state every year. Only the best of the best make it into the books. Most of the stories in the books contain at least one important lesson that hunters can learn from reading them. Some of the stories are full of advice that hunters can benefit from.
Photos of live bucks with impressive antlers that were taken by Smith, who is also an accomplished wildlife photographer, grace the cover of each of the six books in the series. A banner across the top right hand corner of the cover of the books identifies the number in the series. When Book 1 was originally published, however, the author and publisher didn’t know there was going to be a Book 2, so there was no banner on the cover of that title.
A banner labeling Book 1 appropriately was added to the 20th anniversary edition. A gold label that says “20th Anniversary Edition” in the lower right hand corner also clearly identifies the collector’s edition of the book. The cover isn’t the only thing that was changed on the anniversary edition. The contents of the book were also updated and new photos were added to make it even better than it was.
Many hunters who have read the book say its contents help get them get pumped up for the coming season. Plenty of deer camps contain copies of one or more of Great Michigan Deer Tales. Some hunters even take the books with them to their blinds to help pass the time while they wait for their “big one” to arrive.
As it says on the back cover of Book 1, “If you are interested in bagging a book buck in Michigan, studying this collection of success stories will help make it happen. There’s no better way to learn than from those who have already accomplished the feat.”
Copies of Great Michigan Deer Tales can be ordered through any bookstore. They are also available in some sporting goods stores and gift shops across the state. Autographed copies can be ordered through the author’s website: www.richardpsmith.com. The mail order price for Book 1 from the author is $15.50 and a complete set of the six books is available for the special price of $72 postpaid. Special pricing is also available from the author for multiple books. For those who prefer not to order online, orders can be sent to 814 Clark St., Marquette, MI 49855.
Great Michigan Deer Tales: Book 1
by Richard P. Smith
Smith Publications
ISBN13# 978-0-9617407-5-7
ISBN10# 0-9617407-5-2
Retail Price: $11.95
Mail Order Price: $15.50 (includes tax & postage)
Special Pricing for sets of books