The Upper Peninsula has long been a place of fascination for authors, songwriters and storytellers. From Henry Schoolcraft to Ernest Hemingway to Jim Harrison, the landscape and people of the U.P. have been provided a seemingly endless source of written material. It is these words that will be front in center in a unique public event being sponsored by the Beaumier U.P. Heritage Center. “The U.P. in Story,” will take place on Friday, April 26 at 7:30p.m. at Forest Roberts Theatre. The event will be dedicated to the written and sung word and will feature a wide variety of individuals including radio personalities, local performers and scholars, reading or performing written works by the famous and not so famous. The event is free and is being sponsored by grants from the National Endowment for the Arts and the Michigan Council for Arts and Cultural Affairs.
In addition to the authors aforementioned, there will be works read by Robert Traver (John Voelker), Jane Johnston Schoolcraft, Philip Caputo, Lon Emerick, Jane Piirto and many others. In addition there will be traditional folks songs and contemporary songs by other U.P. songwriters. Some of the individuals currently signed on to read and perform are Oren Tikkanen, Nicole Walton, Walt Lindala, April Lindala, Daniel Truckey, Leigh Barry, Steve Waller, Corinne Rockow, Dan Rydholm, Jeff Krebs, Jerry Mills and more are to be announced soon. 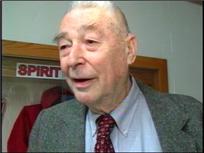 As part of this exciting event, the Beaumier Center will also be awarding the 2013 Upper Peninsula Folklife Award to the late storyteller and historian, Fred Rydholm. In 2009, the Beaumier Center created the Upper Peninsula Folklife Award to honor individuals and organizations that have made a significant contribution to the preservation and promotion of the region’s traditional arts and culture. This will be the fourth time the award has been given with past recipients including folk musicians Johnny Perona (2009) and Les Ross Sr. (2010) and storyteller/musician Oren Tikkanen (2012).
Fred Rydholm’s legend as a historian of the Upper Peninsula’s ancient and recent history has grown far and wide. One of the most highly regarded bearers of the U.P.’s oral traditions, his work as an educator, author and guide in the Huron Mountain wilderness cemented his importance to preserving the traditions of the region. His service work for the Bay Cliff Health Camp, Yellow Dog Watershed and as the mayor of the City of Marquette, rounded out a life dedicated to community and the land. In his April 6, 2009 obituary, the Mining Journal wrote,

“Known and beloved as a storyteller, mentor and friend to countless numbers of followers and fans both regionally and internationally through his books, travels and speaking tours, Rydholm inspired and influenced the way many think and relate to their personal life story, their cultural identity and their relationship to the Upper Peninsula’s wilderness heritage.”