March 24, 2013 (Fayette, MI) Donna Winters, a resident of Fayette on the Garden Peninsula and the author of seventeen novels about the Great Lakes, was recently given a highly unusual honor by her hometown. The mayor of Brockport, New York, the Erie Canal village where Donna grew up and the primary setting of her latest novel, The Bluebird of Brockport, has proclaimed April 2013 to be “The Bluebird of Brockport” month. The proclamation reads in part, “Now, therefore, citizens are encouraged to join with the Village Board in this salute to Erie Canal life and read The Bluebird of Brockport in April 2013.”
“In thirty-one years as an author, I have never received such an amazing response to my writing,” said Winters. “The book is my cultural legacy to my hometown, accurately portraying Brockport life in 1830, and to have it recognized as valuable to its citizens by official proclamation far surpasses my wildest expectations.”
Bluebird of Brockport tells the story of Lucina Willcox, an eighteen-year-old farm girl who goes canalling, and Ezra Lockwood, a twenty-four-year-old canal boat builder who has been her friend since childhood. History, romance, adventure, and mystery combine to convey a very pervasive feeling of authenticity for Erie Canal life in the 1830s.
Winters credits Archie Kutz, the owner of the Lift Bridge Book Shop where her book was launched on June 2, 2012, for getting the village “onboard” with the proclamation idea. “He proposed the concept and convinced them of its merit. This is not something I could have done for myself, or even conceived of,” said Winters. She and her husband, Fred, will travel to Brockport in late April to attend the village’s Canal Fest from April 29 to May 5. During that time, Winters will visit various venues where she will read from and autograph her book.
Winters’ book, Bluebird of Brockport, A Novel of the Erie Canal can be purchased for $18 at various online retailers including http://www.liftbridgebooks.com/ . 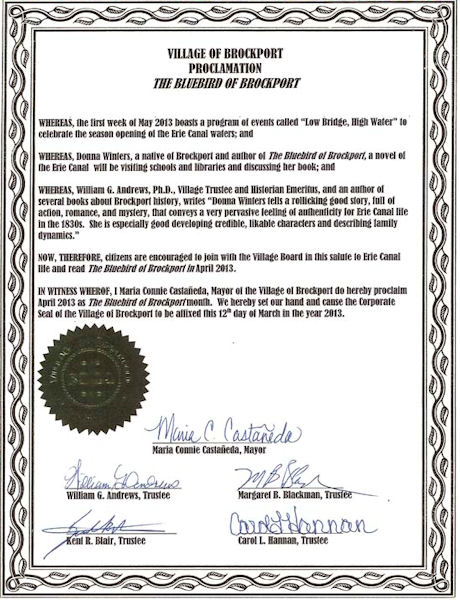 Learn more about Donna Winters and her writing at www.greatlakesromances.com .