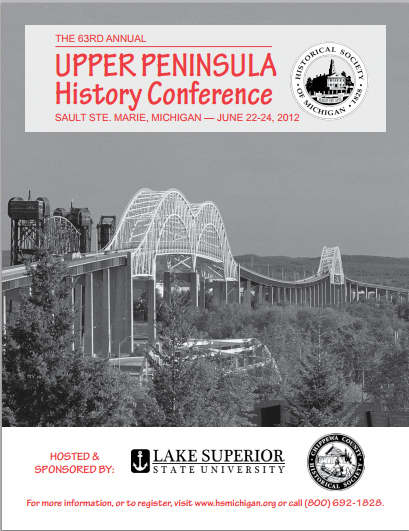 Sessions 2, 3, and 10 are by UPPAA authors – Kathryn Eckert, Sonny Longtine, and Jan Huttenstine. Kathryn is the former Michigan Preservation Officer.  All three have been a source of ideas, inspiration, and historical evidence for UPPAA authors such as Tyler R. Tichelaar (My Marquette)

The three-day event will begin Friday morning with a pre-conference workshop discussing various aspects of collection development. Later in the afternoon, attendees can elect to attend one of two tours. While one will take visitors to both the Cloverland Hydroelectric Plant as well as Lake Superior State University, the second will take participants on a walking tour of the International Bridge Plaza. The evening will come to a close with an outdoor BBQ at the Cisler Center Courtyard, followed by a performance by Mike Fornes of Whispers of the North, a Gordon Lightfoot tribute band.
On Saturday, speakers will present lectures and sessions that consider various aspects of Sault Ste. Marie and Upper Peninsula history. Keynotes and sessions will cover topics such as: