UPPAA member Raymond Luczak proudly announces his new book of short stories based in Ironwood, Michigan.  The full title is Compassion, Michigan: The Ironwood Stories. It is now available at online stores including Amazon and Barnes & Noble. Local bookstores which stock the book will be announced shortly.

Synopsis: Encompassing some 130 years in Ironwood’s history, Compassion, Michigan illuminates characters struggling to adapt to their circumstances starting in the present day, with its subsequent stories rolling back in time to when Ironwood was first founded. What does it mean to live in a small town–so laden with its glory day reminiscences–against the stark economic realities of today? Doesn’t history matter anymore? Could we still have compassion for others who don’t share our views? 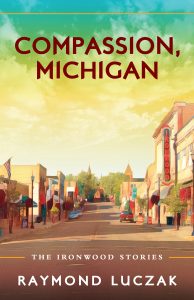 A Deaf woman, born into a large, hearing family, looks back on her turbulent relationship with her younger, hearing sister. A gas station clerk reflects on Stella Draper, the woman who ran an ice cream parlor only to kill herself on her 33rd birthday. A devout mother has a crisis of faith when her son admits that their priest molested him. A bank teller, married to a soldier convicted of treason during the Korean War, gradually falls for a cafeteria worker. A young transgender man, with a knack for tailoring menswear, escapes his wealthy Detroit background for a chance to live truly as himself in Ironwood. When a handsome single man is attracted to her, a popular schoolteacher enters into a marriage of convenience only to wonder if she’s made the right decision.

RAYMOND LUCZAK, a Yooper native, is the author and editor of 24 books, including Flannelwood. He lives in Minneapolis, Minnesota.

“These are stories of extremely real women, mostly disappointed by life, living meagerly in a depleted town in the Upper Peninsula of Michigan. Sound depressing? Not at all. Luczak has tracked their hopes, their repressed desires, and their ambitions with the elegance and precision of one of those silhouette artists who used to snip out perfect likenesses in black paper; people ‘comforted by the familiarity of loneliness,’ as he writes.” –EDMUND WHITE, author of A Saint in Texas