For Immediate Release
Book World Hosts Opportunity to Meet Local Authors
Marquette, MI, December 8, 2014—On Saturday, December 20, from 1-4 p.m., four local authors will be signing books and greeting the public at Book World in Downtown Marquette. All four authors live in the Marquette-Harvey area, but write about a wide variety of topics. 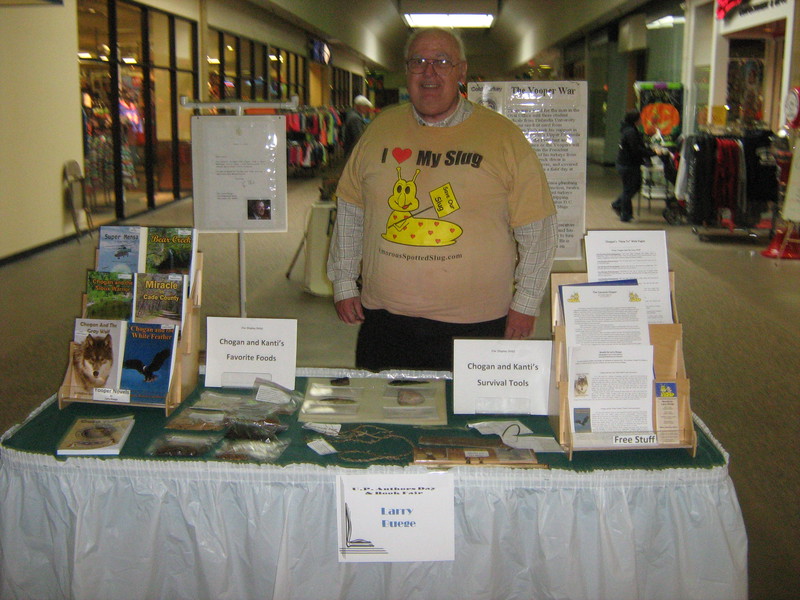 If you’ve seen the guy in the amorous spotted slug costume promoting the cause for state slug in Downtown Marquette, then you’ve seen Larry Buege. Now you have the opportunity to talk to him about his campaign and get personalized copies of his book Cold Turkey, a futuristic U.P. novel about U.P. statehood and a strange prophecy initiated by the said slug. In addition, Larry will be signing copies of his popular young adult Native American fiction series beginning with Chogan and the Gray Wolf and his many other novels. Check out his website www.LarryBuege.com. 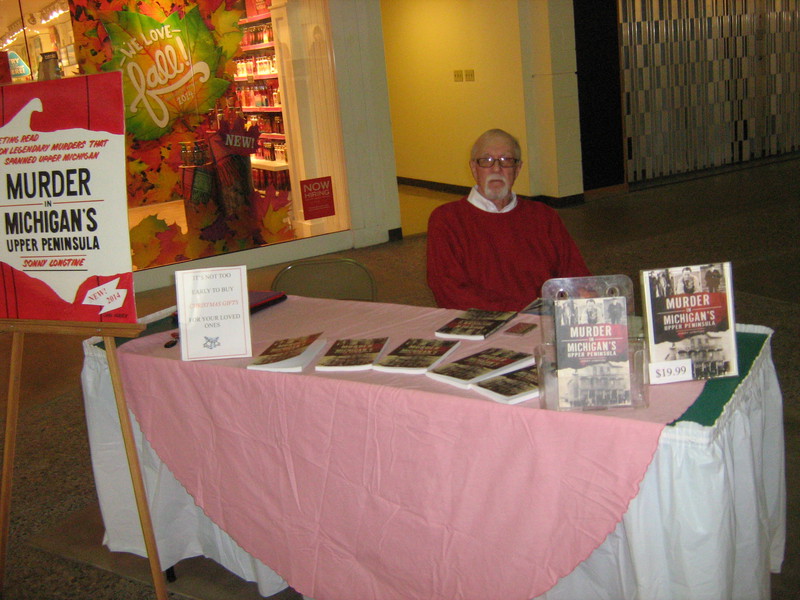 Sonny Longtine, a retired teacher, has spent his retirement researching and writing about the history of the U.P. His first book, Marquette, Then & Now, appeared in time for Marquette’s Sesquicentennial in 1999. He followed it with Michigan’s Upper Peninsula: Life Legends and Landmarks and Courage Burning. Since then, he has found himself wading in blood—figuratively. His latest book, Murder in Michigan’s Upper Peninsula, tells the true stories of several U.P. murders, spanning from the 1800s to the present century.

Gretchen Preston was raised in Portland, Oregon, and worked as a medical social worker, but when she met her future husband, he asked her to marry him and come live in the U.P. at the end of the road and write books. Fortunately for Upper Michigan’s children, Gretchen said, “Yes.” She began telling stories to a neighbor girl she babysat, and those stories then became Valley Cats: The Adventures of Boonie and River, about two cats who are adventurers in the U.P. The book has been followed by two sequels, all beautifully illustrated by Karin Neumann. Gretchen’s purpose is to teach children about U.P. history, geography, and nature, while also entertaining them. Visit Gretchen at www.prestonhillpress.com
Tyler R. Tichelaar is a seventh-generation Marquette resident. Although he earned a Ph.D. at WMU and taught for several years, his true love was always fiction and the U.P. so he returned home to write about his roots. The result has been his popular The Marquette Trilogy, My Marquette, the recent play Willpower, the novel The Best Place, about two women who grew up in the Marquette orphanage, and The Children of Arthur historical fantasy series about King Arthur and his descendants—yes, he thinks he’s one of those descendants. Visit Tyler at www.MarquetteFiction.com and www.ChildrenofArthur.com
Lee Laforge, manager of Book World, encourages the public to come visit with the local authors on December 20th. “Local books are a big part of our business here at Book World,” Laforge said. “Both locals and visitors love to learn more about the Upper Peninsula and bring home a piece of the U.P. Books make great gifts for that reason, and also for people from the area who now live elsewhere. Come get a book signed for yourself or someone else and enjoy the holidays.”