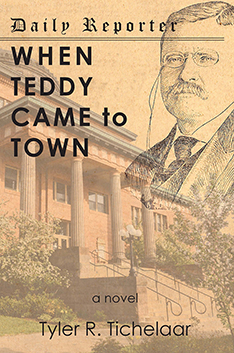 Matthew Newman, reporter for the New York Empire Sentinel, should have seen his assignment to cover the trial as the opportunity of a lifetime. But Matthew is also a native of Marquette, Michigan, where the trial will be held. Matthew left Marquette long ago and does not relish returning to deal with a distant sister and her drunkard husband, or to attend his niece’s wedding, set for the weekend after the trial begins.The situation becomes more difficult for Matthew when he learns that Roosevelt is staying at the home of George Shiras. Once close friends, Matthew and George have not seen each other in years after a serious blow caused Matthew to leave Marquette. Now he is uncertain how to deal with George’s overtures of friendship.

As one witness after another, from navy admirals and secretaries to bodyguards and butlers, are called forth to testify in Roosevelt’s defense, Matthew must call forth his past and come to terms with it.

Novelist Tyler Tichelaar, a native of Marquette, Michigan, goes where biographers have never gone in detailing not only the significance of the often-ignored Roosevelt libel trial, but also how Roosevelt’s presence stirred Upper Michigan into a frenzy of excitement. This is the tale of a big man in a small town, how that small town responded, and how we all influence one another, often in unseen ways.